I just experienced one of the most amazing days of my life. Sometimes, when you least expect it, opportunities present themselves that clarify for you that you are on the right track. I knew when I learned about this deployment that Iraq was precisely where I am supposed to be at this point in my life. When I heard about the Iraqi Women’s Engagement program, I knew I needed to be part of it.

 
The opportunity presented itself suddenly when I was asked to go on my first engagement. The details fell together at the last minute and suddenly I found myself on an Osprey, exchanging glances with the corpsman who accompanied me, and wondering if flying in that thing might be the most dangerous thing I did on the mission! All of the women interested in participating in the program had received “outside the wire” training so I had some idea of what to expect, but my learning curve was still steep!

Thank goodness for the Marines…some of the most trustworthy, squared-away men and women I have ever met. The mission leader met us at the airport and I knew I was in good hands. He made sure we had all the information we needed and set us up with a place to sleep for the night. The next morning, he picked us up and took us for breakfast. Good thing because wearing all my protective gear for nearly 12 hours burns a lot of calories…my flack vest alone weights 40 lbs!

The mission had been arranged by the Iraqi Army, with the assistance of a Marine transition team. Our mission leader and his men have been living and working with the Iraqi Army, providing guidance and support. We headed out to a small village and, thanks to the design of the armored vehicle, I had a great view of the Iraqi countryside. In contrast to the constant red-brown of the base at Al Taqaddum, the Iraq outside the window was green and sprouted huge palm trees. We saw sheep, goats, cows, and chickens. The people were out in their yards gardening or enjoying the sunshine. When we passed through the town, the shops were bustling. Many men, but mostly children, called out greetings and waved as we passed by.

We were welcomed with enthusiasm when we arrived at our destination and the Iraqi Army men and journalists were very interested in taking pictures of us with the children. These engagements are publicized widely to show the people the good things that the Iraqi Army is doing for them. We set up our little clinic in the home of one of the village’s prominent citizens and his children were the first to be seen. 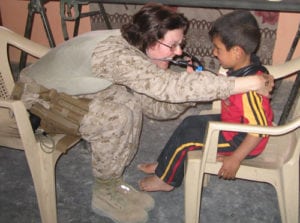 What beautiful people! The children have huge brown eyes with long lashes and they smile easily. Only a few of the young ones were frightened but, just like American children, they relaxed after I talked with their mother and allowed me to examine them. Most of the mothers were afraid that their children were too thin, but this was not the case. The children were healthy appearing and I was able to judge their age easily, which attests to their normal growth and development. The mothers voiced common concerns about their children; fever, cough, and stomach aches. I tried to educate them on care of simple childhood illness. Pinworns are common so I treated many children for this, although they are likely to catch them again.

 Thanks to an amazing female Iraqi interpreter, I was able to really connect with the women. Some female complaints are universal! One woman had 14 children and complained of fatigue, backache, and headaches. I asked the interpreter if she could translate “motherhood is a bitch!” She did and the Iraqi women erupted with laughter! Another woman was having marital trouble. She wants to divorce her husband but he won’t allow it. She complained of headaches, fatigue, and difficulty enjoying her life. Her symptoms suggested she was depressed. I lightheartedly had the interpreter tell her that “I can’t fix her husband, but I can give her something for her headaches.” Because of the rapport built over the course of the afternoon, this brought a warm smile to the woman’s face.

After we finished seeing the women and children of the village, the Iraqi General who accompanied us invited me, my corpsman, and the Iraqi interpreter to join the men for dinner. Bright table cloths were spread on the grass and large platters of food were served. There was an abundance of their flat bread, which was warm and tasty. The platter contained rice, spiced noodles, and dates topped with chicken and lamb. Many of the men ate with their hands but we scooped up food with the bread…it was delicious. Sliced cucumbers and tomatoes sprinkled with sea salt were also served. The meal ended with hot tea, which they drink sweetened with lots of sugar. The pictures attached capture the mood of the day perfectly!

It was incredibly heartening to see the close relationships between the Marines and the Iraqi Army. The men talked and laughed and obviously enjoy each other’s company. All of the men wanted pictures with us before we left and the gratitude was overwhelming. Connecting with patients is the most rewarding part of my job. The fact that I could connect with the Iraqi people in this way was such a thrill. I can’t wait for the next mission!