Make sure you checkout a new feature beginning with this issue. For the next several issues one of our instructors (guides) will give you a firsthand look at their work, teaching and life experiences, and how they came to be Fissure guides. I think you will enjoy their stories and getting to know how they came to be so passionate about helping others learn and develop.

We deal with change constantly, but we’re still not handling the transitions very well. For a great example we only have to look at the million or more Green Bay Packers and Minnesota Vikings fans that now all have to find a new routine involving Bret Farve. Now I know not all of our readers are football fans, but most everyone is aware of Bret Farve’s return to football after a “hall of fame” career with the Green Bay Packers. Bret is having his own trouble with change and transition, but that is another topic for another day.

In our change management and leadership training we define change as the event that causes your current routine to “be no more” while transition is the process we all go through to finally arrive at our new routine. The part of the transition process that currently relates to most of the Vikings and Packers fans is the “Chaos” phase. It’s the part of the transition where you have already “Let Go” of the old routine (Packers fans have definitely let go, check out “We’ll Never Forget you Brent” on Google), but haven’t quite arrived at what the new routine is going to look like. The Chaos phase is best described as a time of opportunity where you are open to the possibilities of what the new routine will be. The chaos phase is characterized by ups – a result of an idea you have of what the new routine is going to look like, and downs – a realization that your idea is not the right or
final answer. 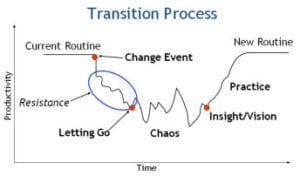 So how do we help all these Vikings and Packers fans stuck in Chaos? People in Chaos can be helped through the process by encouraging them to look for answers to the new routine and by helping them be as creative as possible in coming up with innovative answers. I have a personal reason for thinking about how to help the Farve fans get through Chaos. As a transplanted Minnesotan, married to a Minnesotan, I have spent the last 20 years watching my wife watching the Green Bay Farve. To put it nicely, she didn’t like him much and I would say “if he played for the Vikings you would love him”. I won’t share with you in writing her response to that statement. So now that he is playing for the Vikings I am having a firsthand look at a fan in Chaos. One moment she can almost see him as the Viking’s quarterback and the next moment she is seeing him as Green Bay Farve. It is the classic case of the ups and downs of Chaos as she looks for the answer that will allow her to actually cheer for Farve’s success, rather than his failure.

You can encourage their answers, as I have done with my wife, but be careful of trying to give them the answer, as I have learned not to do with her (at least for the most part). Ask questions to trigger their creativity. An example for my wife might be “Doesn’t Bret look good in purple?” The key is giving people in Chaos the time they need to find their own answer. Some like the feeling of the unknown and will take longer, some don’t like the unknown and will arrive at their new routine more quickly. We all need to just give the Green Bay and Vikings fans time to find
their answers.

It has been a while, and worth the wait as Mike Wold has contributed a very nice article on hope. He shows us why it is important as project managers and people to have hope, and that it also needs to be realistic hope.
In his article in this issue Geof Lory asks a great question: We spend a lot of time measuring things like schedules, budgets, and requirements. But is that really what’s most important to our projects?