Ten years is not a very long time in the life-cycle of asoftware product. Many companies are running and enhancing programs originally developed decades ago. Ten years ago Fissure released a computer based simulation technology that resides on the computer.

Over the last ten years we have enhanced the software and added about ten different simulations; including business analysis and several customized simulations for clients. The simulation runs great and the realism, engagement and effectiveness in developing skills is unsurpassed. So what drove Fissure to undertake a large three year effort to develop a web-based simulation technology?

First we always knew we would go in the web-based direction. In developing the original computer-based simulation we built the “reference documents” in HTML format, with the thought that it would facilitate the eventual transition to the web. Second, more and more training is moving to the internet. Although we can deliver online training using the computer-based simulation, it has drawbacks and limitations that an online simulation would not have. Third, even after just 10 years, the user interface needed an update. It is what I like to call the “sizzle” (looks) vs. the “steak” (realism).

Our computer-based simulation had plenty of “sizzle” when it was built 10 years ago, but compared to newer simulations with much less “steak”, it appeared dated.

As an example, many of you are aware of our use of the Microsoft Agent technology and how we use the parrot we call Peedy to provide instructions, advice and feedback during the simulation. Some people really liked Peedy and some did not. We struggled with keeping him or replacing him in the web-based simulation with something new.

After much thought we decided to replace Peedy with a human. Her name is Buki. You may miss Peedy (I know I will), but you will find his replacement a step up in both personality and “sizzle”.

With good reasons for the development we identified four high level goals for the web-based simulation: 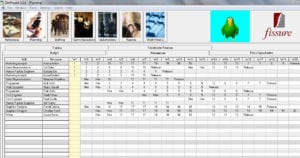 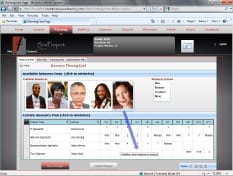 3.  Maintain the current realism of a project including the controls and relationships between decisions and results – side by side testing between the old and new simulations provides the identical results

When you get a chance to run one of the new Fissure web-based simulations I think you will agree that we met the above goals. But we’re not done. We have plans to add even more sizzle in future releases, so stay tuned.